I’m fairly convinced, though don’t have any stats, that there’s been a fairly large increase over the last few years in the number of concerts, talks and events for people who like hearing film music performed live and hearing from the composers who wrote it.

Living in London I’m spoiled for choice with the wonderful BAFTA Conversations with Screen Composers – a series of interviews with composers at the Royal Albert Hall. The RAH has also been increasing its programming of concerts celebrating the work of a particular film composer, including screenings of films with a live orchestra performing the music.

One of the best resource for film music concerts and related events around the world is the Movies in Concert website especially as anyone can submit details of a concert that’s been published on an events page.

I would like to encourage composers, conductors, musicians, event organisers, orchestra folk, venue staff, film music fans and anyone else to see if concerts they know of are already listed and, if not, to add them using the Submit a Concert form – and to make a note of the page for future concerts, thanks!

The site now also has a dedicated Twitter feed – @moviesinconcert – and whenever new information is added to the website, or information already there is updated, an update-tweet will be emitted automatically by the account. I created this Twitter account after spotting that they had an RSS feed, and it’s since been adopted by the site (woohoo) but I’m not affiliated with Movies in Concert.

If you’re interested in the technology behind the @moviesinconcert Twitter account (it’s not very complicated) read on, in case you want to set up something similar.

Turning website RSS updates into tweets – How to do this

Movies in Concert, like many sites, has an RSS feed already set up for its updates – you can use an RSS reader to follow these (a bit similar to signing up for email updates). It’s also quite straightforward to set things up so that each new update is turned into a tweet that anyone on Twitter can follow. There’s a great little website called IF This Then That (IFTTT) which will do it for you.

All you need is

To make your own Twitter feed based on an RSS feed you can use an IFTTT recipe that converts RSS feed items into tweets, it’s called RSS to Twitter.

This is the specific recipe I used, adapted from the RSS to Twitter specifically for @moviesinconcert, you’re welcome to use it but note that there’s no particular benefit in recreating the same feed as it already exists!

Here’s what it looks like under the bonnet with the RSS feed as the ‘trigger’ causing the action of sending out a tweet. I’ve added the hashtag #filmmusic and asked the recipe to publish this along with the title of the update from Movies in Concert along with the address (Entry URL) and the first line of the page. 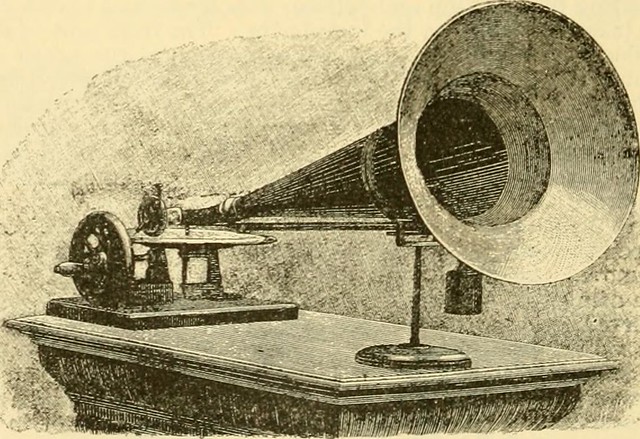 A month ago I went to a rather magical event which involved hearing some very old audio recordings made in London. We were played a selection of sound clips that stretched back in time from the 1950s, gradually going back, further and further, until we were listening to a recording made in the 1888 of people singing Handel’s Messiah.

Of course the technologies change over time and we went backwards from magnetic tape and vinyl back through metal tape discs to Edison phonographs. It was wonderful and I wrote about it here: London’s Lost World of Sounds w @LondonSounds – a magical evening at The Social, of early London sound recordings (30 August 2014). 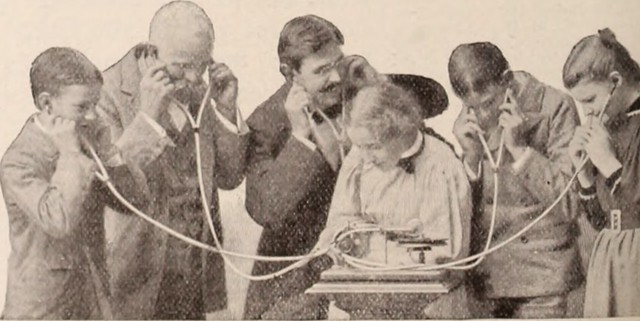 The picture above shows the Berlin Gram-o-phone with extra hearing tubes for multiple listeners (7½ cents extra, each) as advertised in the Christian Herald in November 1896.

Ian Rawes of the London Sound Survey put the clips in context and it was a nice mixture of oral history and sound-recording history, in a cosy bar which was atmospherically lit with candles on the table.

If I wasn’t doing something else this Friday I’d be heading off to Brighton for the evening because he’s giving the talk there and I’d love to hear it again. Highly recommended.

London’s Lost Worlds of Sound
Friday 7 November, 8pm (£6/5), Marlborough Pub & Theatre, 4 Princes St, Brighton
http://www.drinkinbrighton.co.uk/events/marlborough/londons-lost-worlds-of-sound-2014-11-07 [there’s a link to tickets but if you’re local you can pick them up in person with no booking fee, cash only]
“In this spellbinding show, hear rare recordings of London life, from the 1950s right back to the 1880s. These sounds, captured by broadcasters and amateurs alike, bring to life a rowdy, vocal London filled with vigour and eccentricity. Lavender sellers and fortune tellers, the vanished songs of schoolchildren, fire stations and sewer workers, the propaganda and reality of the Blitz – all feature in this unmissable night for anyone into the history of sound recording, radio or cities. Presented by Ian Rawes, a former British Library sound archivist, whose world renowned London Sound Survey contains over 1500 recordings of London life. ”

It’s the University of Liverpool Press’ birthday and they’ve decided to make their journals free during April. I heard of this because I’m on the Music and Moving Pictures mailing list (low volume list, about film music and related stuff) and the info below was posted recently.

I’m particularly delighted because that particular morning I had been reading, via a PDF I sent to my Kindle, Ennio Morricone’s very enjoyable 2007 essay on composing music for film. I wondered about the feasibility of sharing an excerpt (which I’ve recently learned how to do while reading Trevor Cox’s Sonic Wonderland) but wasn’t sure if it would work because I didn’t acquire it via Amazon.

Then a couple of hours later this email arrived:

Liverpool University Press is one of the UK’s oldest scholarly publishers and one of its youngest, being both 115 years old and 10 years old in April 2014.

The latter anniversary marks the relaunch and rebirth of the Press, an event that it is celebrating by making all of its journal content, including Music, Sound, and the Moving Image, available for free online during the month of April.

Content is available now simply by visiting our http://liverpool.metapress.com site, with no further setup required.

This journal really is one of my favourites – largely because it’s reasonably intelligible to someone who likes film music but doesn’t really know much about the technicalities of it. There’s obviously a fair bit of film-related ‘textual’ jargon (I’ve just about got to grips with diegetic, non-diegetic, metadiegetic and extra-diegetic and narrational v. narrative) but I enjoy dipping my eyeballs into it nonetheless.

“It is important to note that visual studies benefits from, and indeed embodies, the privileged status of ocular-centrism that limits much art and visual media scholarship: what visual studies overlooks – or, rather, overhears – is precisely that which sound studies must sound out.“

also this, from 2009 – I rather like the idea of different musical modes in Terminator films.

“Karen Collins discusses the sonic aesthetic of the first two Terminator films, finding that recurrent elements (the use of Phrygian and Aeolian modes, low bass sounds, urban signifiers, and the use of metallic percussion) help reinforce narrative and plot symmetry. “

“Documentary filmmakers have long struggled with nondiegetic* sound as somehow less authentic, as detracting from the real, since the days of Flaherty and Grierson; this distinction is maintained in news programmes where ‘nondiegetic’ music may intrude over network logos and anchors’ introductions, but is kept strictly out of the news reports themselves: imagine 60 Minutes running an ominous musical score beneath an interview with Fidel Castro, or Anderson Cooper developing a distinctive leitmotif to introduce the appearance and accompany the comments of each of his regular guests.“

*not part of the ‘”story” world’, if my understanding of the term is correct. If not, oh well 🙂

Ages ago I learned of the Berna vintage electronic studio, a piece of software which Mac users could buy for a few pounds. Not having a Mac I didn’t buy it, and now it seems that it’s no longer available. Anyone know more?

The nearest I’ve found to it, and pretty fantastic in itself, is the BBC’s page which takes advantage of some clever web audio thing to let you play around with radiophonic sounds.

I heard of the Mozzi database of sounds for Arduino after reading a paper(1) from the ICAD 2013 (International Conference on Audio Displays) conference which referenced its creation and development.

“Currently your Arduino can only beep like a microwave oven. Mozzi brings your Arduino to life by allowing it to produce much more complex and interesting growls, sweeps and chorusing atmospherics.”

The example sounds are lovely, I particularly recommend ‘A chordal wash of detuned oscillator pairs’ which reminded me of something I might hear in a Radiolab podcast.

Virtual piano
http://www.bgfl.org/custom/resources_ftp/client_ftp/ks2/music/piano/index.htm – click to open, then click to activate the keyboard which you can operate with mouse or keyboard.

hhhjhgd kkk;lkj kjhh;khgd saasassdyh hk;;;lkkh – typed out on virtual piano, will render a reasonable approximation of a section from ‘The Heart Asks Pleasure First’ theme from The Piano by Michael Nyman. To be fair, his version is slightly better 😉

I hated piano lessons as a child. Hated the instrument, hated the teacher(s), really uninterested in the whole thing and was equally bad at violin, flute and cello. Possibly more was expected from me as both my parents are reasonably competent musicians (dad was church organist, and was paid for it too, mum LRAM* violin and paid soprano in church choir also). Me, not so much. So growing up with music everywhere is probably what made me loathe participating in it, although I’ve always enjoyed listening to it. But that piano bit is lovely, even if my crap rendition isn’t.

On my ‘to watch’ list is the first in a series of three Channel 4 programmes about music. The pianist James Rhodes presented the first installment in which he played piano for people with mental health conditions. He also wrote a really interesting article encouraging everyone to get off their butts and do something with a bit of passion. I don’t disagree with his sentiments but alas, where learning a musical instrument is concerned, I simply can’t be bothered. Good article though.

Recently I have been wondering if, now that I’m a very good touch-typist (maybe “Grade 7”?), I have any transferable skills from typing that would help in learning to master the other form of keyboard. I’ve always been able to pick out a tune OK, but that’s mostly the intervals helping me (up a bit, down a bit, up a bit more). I wish I could be bothered to find out though 😉

A happy musical childhood memory was playing with the tuning forks and pitch pipes that my parents had. I used to try and work out the pitch at which our old electric hob rings were humming at. They made a very distinctive twang when switched on and there was actually an octave difference between one of them and the pitch the oven hummed at. I miss that oven.

Sadly tuning forks also feature in alternative medicine, a quick way of extracting money from people. I wrote about it here and received a few comments from ‘true believers’ in tuning fork therapy. I will not be publishing any comments that are favourable to tuning fork therapy I’m afraid 😉